Many years ago I was working as a facilitator on the 7 Habits of Highly Effective People programme.

It was a wonderful occupation at a formative time in my own life.

Work with purpose is precious and I was very lucky to have it.

On the first evening of the programme we would gather around the TV in the conference room. It was time for the highlight of our day together.

Time to watch The Man Who Planted Trees. 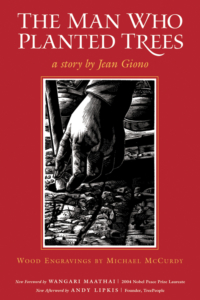 In 1953, Readers Digest gave Jean Giono, one of France’s most famous authors, an interesting task. To write a story about the most extraordinary character he had ever met.

Inspired by a reverence for nature and to protect the forests of the world, Giono wrote The Man Who Planted Trees. It was to become his most loved story.

Much later it was converted into an animated film. A piece of work so well crafted that it won an Academy Award. The film is artistry and beauty at the highest level.

On every occasion, it cast its spell over me.

The story begins with a young man on a walking tour high in the mountains of Provence.

To his dismay, he discovers a barren and deserted wasteland … a place where water and life itself had ceased to flow.

In the far distance, he notices a lone figure. It’s Elzeard Bouffier – the hero of our story.

Having suffered personal tragedy, Bouffier had retreated into the highlands to be alone, with only his sheep and dog as company.

But, as the young man quickly discovered, there was so much more to Elzeard Bouffier.

Realising the land was sick and dying for lack of trees he had decided to put things right.

He was planting trees. One hundred thousand in the first three years and the resolve to continue going until that number would seem like a drop in the ocean.

The young man visited our hero constantly over the next 35 years. In time he would change from sheep to beekeeping.

Yet his purpose never wavered … to restore the land by planting trees.

Slowly, and over many years, water began to flow again.

Communities sprung up in the valley below. Life in these villages revolved around the fountain, where water gushed up in abundance.

Today, more than ever before, this beautiful story resonates with me.

In the mid-1990s our country was trying to come to terms with the demons of the past and to build a new future. The story held meaning then. How do we put things right? How do we create a prosperous country for all who live in it?

Today our land is still trying to heal.

We are still busy building the future.

And now another storm is blowing.

COVID 19 has dramatically disrupted our lives and livelihoods.

Once again I am inspired by the life and actions of Elzeard Bouffier.

In 1914 the Great War broke out and raged on in Europe. Even so, he continued planting. Twenty-five years later the world was at war again. He still did not waver from his work.

The land needed to heal. It was his job to put it right.

Elzeard Bouffier’s dedication to the ultimate purpose of his life was constant and unyielding. Through good and (very) dark times he weathered the storm and created a new and bright future for thousands of people.

It is this, which makes him the hero of our story.

The image of a leader as a sower of seeds, a planter – a grower, is one I hold dear.

If you run a business, manage a team, lead a school, teach a class, or simply have responsibility for yourself, you are the one to make hope possible.

+ To weather the storm.

+ To sow the seeds and plant the trees.

Together, we have to ensure that the generations who come after us have a forest to walk in and a fountain to drink from.

Next time I’ll write about the CEO Rising Summit. There were fantastic contributions from Jim Collins, Verne Harnish, Ram Charan and Patrick Lencioni.

What Kind Of Leader Are You?
Scroll to top